Cross-functionality within a team doesn’t just happen, it has to be deliberately and thoughtfully nurtured. So let’s live the principle of Transparency and make it visible! A tool that I have found highly effective is the Team Spectrograph. A spectrograph plots amplitude against a segment of the radio-frequency spectrum. We can do the same thing with team skills, that is, plot the skill levels team members possess (the amplitude) across the spectrum of skill sets the team needs to have.

Here’s how it works. On a white board or tear sheet, draw a standard x-y graph. On the x-axis, list the skill sets the team needs in order to deliver the work it is being asked to do, each skill representing a tic mark along the x-axis. On the y-axis, draw evenly spaced tic marks from 1 to 10, with zero represented by the baseline of the graph. Then, have each team member self-assess his or her skill level on that one-to-ten scale across all of the skill sets depicted. Have each team member use a different color marker and voila! – you have a team spectrograph that captures your team’s cross-functionality as of that moment in time. 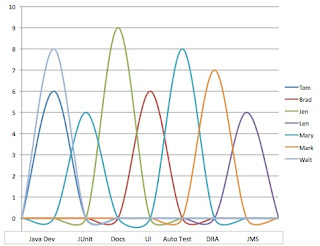 The example above depicts a team that is well-balanced across the needed skill sets, but lacks cross-functionality. The independent, non-overlapping peaks represent skill silos within the team. 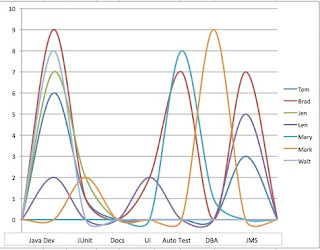 This example depicts a team that is completely lacking the “Docs” skill set. 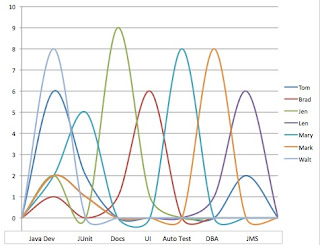 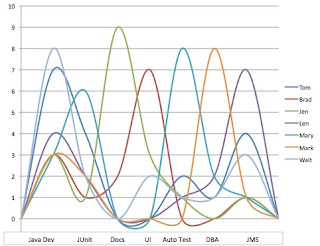 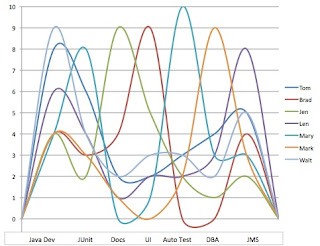 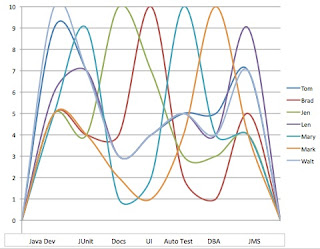 Notice how all of the lines have come off the bottom of the graph indicating that every team member has at least some level of skill in each area. Notice also that the many skill areas have pegged the spectrograph. A side effect of transferring skills throughout a team is generally the enhancement of core competencies among team members. In order to teach someone else, we have to get better at what we already do best.

Another benefit of the Team Spectrograph is that it points out individual skills other team members were unaware of. Now that the full range of skills team members possess is visible, the team can take full advantage of its extant cross-functionality.

Updated:
I will be presenting this topic at the Atlanta Scrum Gathering, May 7-9! We’ll have fun learning more about cross-functionality and building a real Team Spectrograph!